A Grain Within a Cloud of Dust

“How would political responses to public problems change
were we to take seriously the vitality of (nonhuman) bodies?”
Jane Bennett, 2010

In his sound installations, Gil Delindro explores organic materials to render audible corporea-lity, resonance, and processes of change. The exhibition A Grain Within a Cloud of Dust builds on his research in the Algerian-Moroccan border region of the Sahara desert. With performative actions and experimental field recordings, he has built a relationship with a landscape that is inhospitable, sparse, and at the same time, epic.

Against the background of non-human architectures, time, movement, silence, and event enter into a specific relationship with each other. In the sparse environment of the desert, where there is seemingly little that demands attention at a macro level, microscopic events come to the fore and small variances in the soundscape become perceivable. For Delindro’s music, this experience is crucial. In the spirit of musical minimalism, he uses reduced means to develop compositions and installations where elements begin to literally vibrate. Organic materials such as stones or woods are activated and examined with regards to their acoustic attributes.

Through his use of sound and musicality, Gil Delindro extends an invitation to practice a countercultural form of perception that moves beyond great world events and their far-reaching consequences. This form of perception seeks out the political by fostering a sensibility for the reality of vibrant matter, and a respect for a world in which all forms of materiality appear to be animate. 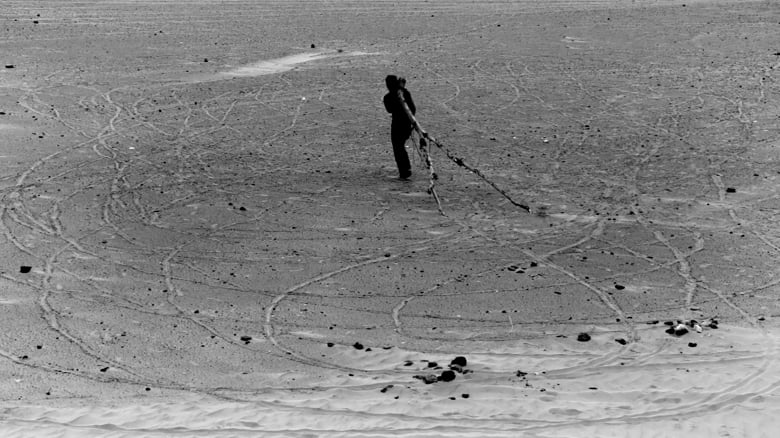 Gil Delindro, Continuum, 2015, video still, documentation of a performance in the Sahara desert - 8 hours and 33 minutes 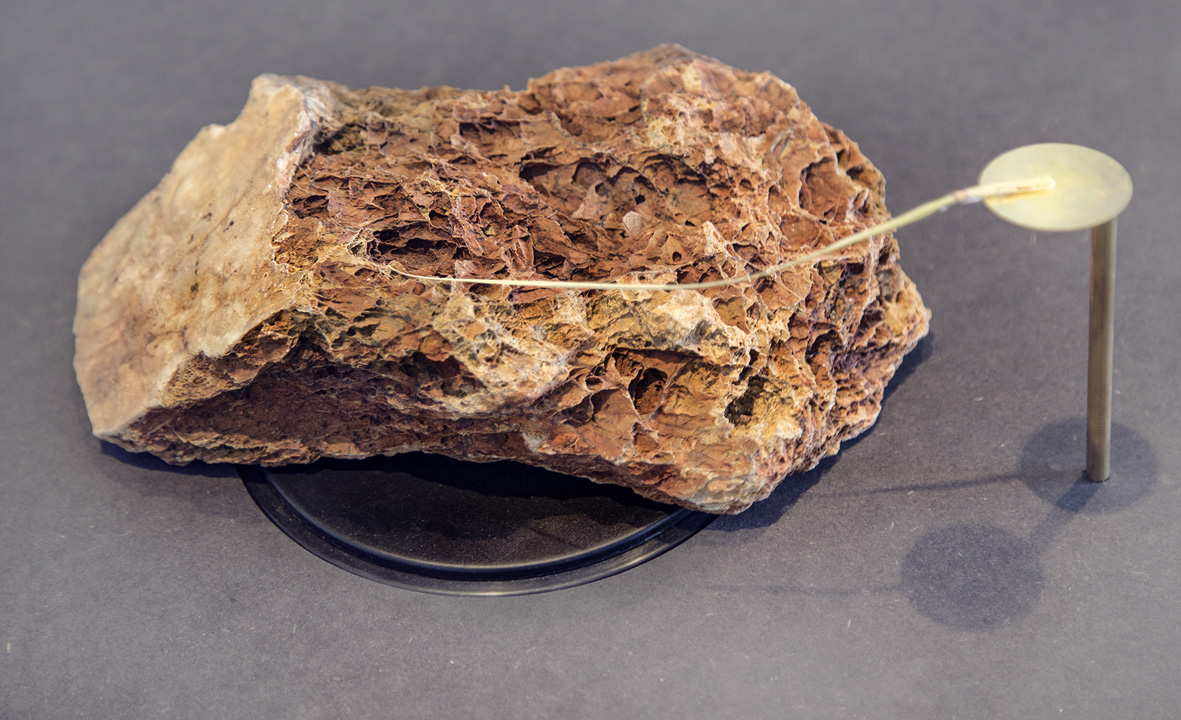 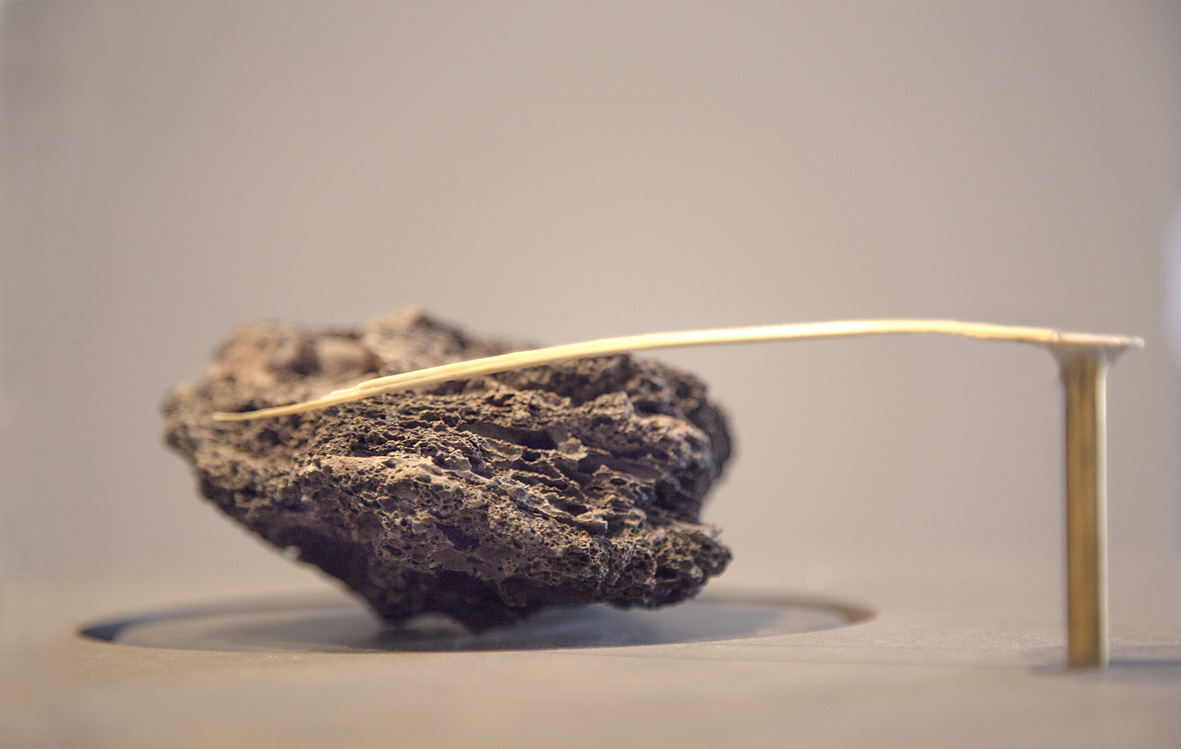 Continuum (2016) is an 8-hour performance in the Sahara Desert, presented within the exhibition as a single-channel video. The performer drags a branch fitted with contact microphones across the desert’s sand. Noise is being produced by the contact of wood and ground. The sound is determined by the consistency of the terrain, as well as the speed of the movement, whilst the branch leaves an increasingly more pronounced trail in the sand. The contact microphones previously used by the artist in 2016’s Continuum also feature in the newly-produced works for this exhibition.

For Cartographies (2018) several stones are arranged on small turntables. Three of the stones come from the designated area at the Algerian-Moroccan border; one volcanic rock comes from The Auvergne Volcanoes Regional Park; and a yellow quartzite from the Balkan Mountains completes the series. Blades of grass read the surface texture of the artefacts – like needles on LP records – and the resulting sounds are arranged into a polyphonic composition. Cartographies brings together diverse geographies, and, using individual elements, describes the characteristics of geologically distinct landscapes.

The compositions created in Gil Delindro’s installations, performances, and field recordings are classified as Drone Music, that is, a form of musical minimalism. Notable features of Drone Music for example are long fades, repetition, and long recordings containing low harmonic variation, and rhythm. In Western cultural historiography, this musical style is closely linked to the composer La Monte Young, the collective The Theater of Eternal Music, and other artists who radically questioned the definition of music in the United States of the 1960s.

Drone Music is not about uniformity or monotony, instead offering forms of composition with limited means, which still have the potential to create complexity. This complexity emerges from listening – an open form of listening, beyond musical expectations – and from paying attention to the smaller details of a sonic experience. A desert as a landscape is ultimately similar to this form of reduction. The variations are as slight as the number and variety of life-forms that can settle comfortably in this extreme environment. The actual richness of this otherwise unaccommodating setting only becomes apparent through an extended awareness, a conscientious and meditative focus on the here-and-now.

Ebor (2018), the exhibition’s central work, stands out with its visually striking three-meter-long tree trunk. Not only does another materiality and type of landscape come into play, different from the desert, but also an item which connects the exhibition to the region surrounding Berlin. The trunk lies in the room like a skeleton, moss and lichen growing on its exterior, raw and hollow on the inside. The artist dug the decomposed wood out from the ground with archaeological precision, freeing it from the earth. The tree trunk is relating with an ELF antenna – a low frequency receiver – via a complex structure of hanging volcanic rocks.

The externally positioned antenna records variations in the ambient electromagnetic field. These variations are caused by different sources, natural but also manmade – electronic devices, for instance. The information recorded in the forecourt of Galerie im Turm is processed by an algorithm, and played in real time through five ceiling-mounted loudspeakers. In contrast to the installations using contact microphones, the recorded electromagnetic charges do not constitute a direct transmission, but a digitally processed field recording. With this real-time composition, Delindro brings the interiors and exteriors into contact with each other – a motif that continually resurfaces in his practice.

The title of the work Ebor refers to a character from Ursula K. Le Guin’s science fiction novel The Word for World is Forest. Ebor Dendep is the leader of a tribe of a humanoid species on planet Athshe. The plot revolves around a conflict between the Athsheans and a group of colonisers, who are busy clearing the planet – on which all land is forested – to secure the timber supply on their home planet. As the title of the sound installation, Ebor attempts to create a character, to express a form of individuality and to relate with a strong personality.

A Grain Within a Cloud of Dust is a sensual exhibition, an exploration of musicality, and an invitation for awareness: for hearing and experiencing. Despite its sensorial focus though, it is not necessarily unpolitical. In her publication Vibrant Matter: A Political Ecology of Things (2010), the theorist Jane Bennett argues for a vital materialism, and increased recognition of non-human involvement in events. In her introduction, Bennett poses the question of how political responses to public issues would change if we took vitality, meaning the vitality of nonhuman bodies, seriously. Delindro’s works are a poetic proposition to practice this perception of a vital materiality, with visual, but above all acoustic, means. 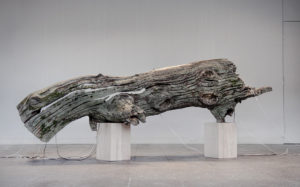 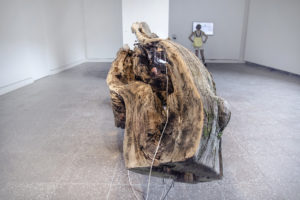 « Capitalo, Chthulu, and a Much Hotter Compost Pile