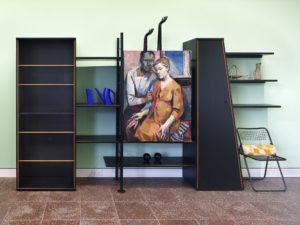 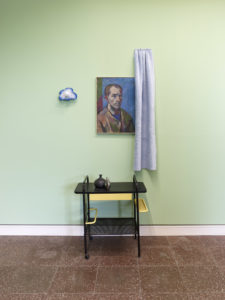 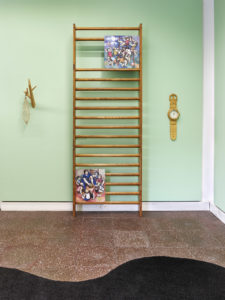 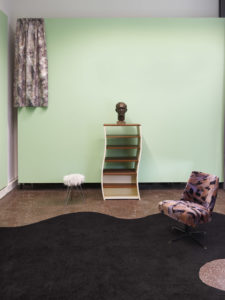 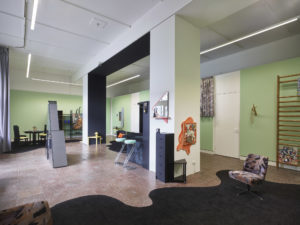 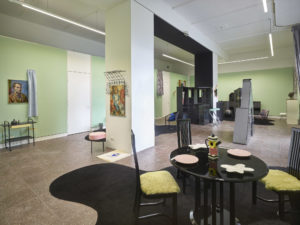 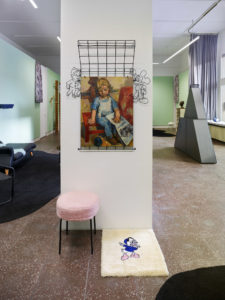 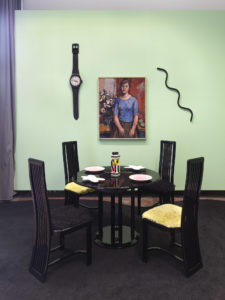 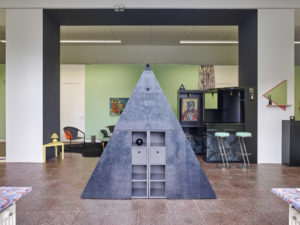 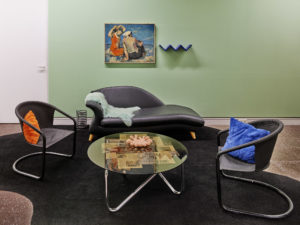 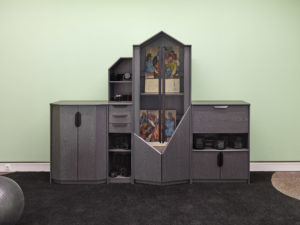 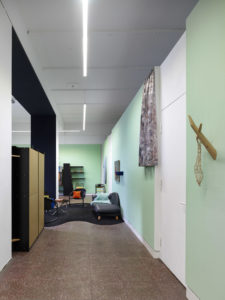 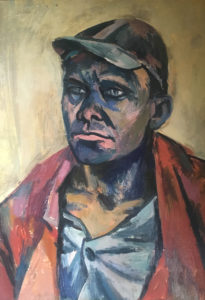 Born in Zwickau in the 1980s, Henrike Naumann witnessed the shift between the socialist German Democratic Republic (GDR) and its amalgamation with the Federal Republic of Germany as a child and young adult. The insights and experiences arising from this form a key point of departure for her artistic work, and connected with this, her discursive, research-based practice. In previous works, for example, she has investigated forms of radicalisation in connection with the history of right-wing extremist ideologies and – in respect to her own generation – with the increasing return and acceptance of attitudes stemming from the extreme right in politics and society today.

For her project in Galerie im Turm, Naumann takes the history of the space itself as a starting-point to investigate the legacy of her grandfather, Karl Heinz Jakob (*1929, †1997, Zwickau). The painter from Saxony was a member of the Guild of Artists of the GDR [Verband Bildender Künstler der DDR], and was also active in other socialist states through organised study trips. His works were shown in Dresden, Karl-Marx-Stadt (Chemnitz), Zwickau, Budapest, Bucharest, Moscow, Rabat, Riga, Havana, and many other cities.1 Galerie im Turm was established in 1965 as the exhibition space of the GDR‘s Guild of Artists‘, before being integrated into the local administration as a communal gallery in 1990. Located in the ground floor of Frankfurter Tor‘s North Tower, the socialist classicist architecture of Galerie im Turm speaks volumes of its own history. Through this exhibition, which includes the works of Jakob – transmitted through the lens of Naumann‘s contemporary position – socialist realist paintings are again to be exhibited in the space.

Henrike Naumann creates expansive installations out of items of furniture, accessories, and interior fittings in the Memphis style, which flooded East German markets at the beginning of the 1990s – largely in the form of cheap imitations. Through this, the artist showcases a particular aesthetic of the everyday that characterised lounge rooms of the newly federated states of Germany, separating that which preceded reunification from that which followed it along stylistic lines. In dialogue with the paintings of her grandfather, Naumann generates a constellation that, if not unfeasible, is certainly anachronistic, falling between social study and family constellation.

The exhibition sees a section of Galerie im Turm rearranged to emulate a dining room containing a portrait of the artist and his partner, Sigrid. An image of the young couple on their way to becoming parents hangs on a cupboard wall. Touchingly, the pregnant woman lies her hand on that of her husband – a tender gesture of affection, even though their gaze does not meet. In order to support the career of her husband, Sigrid Jakob decided against studying visual art. Instead, she became a window dresser, and took care of raising the children. Opposite this image and hanging on a wire coat rack is a depiction of a child with a sketchbook. This painting is accompanied by a wire figurine, a sandman [Unser Sandmännchen]. This character first appeared in a 1959 television show by the German Television of the GDR [Deutscher Fernsehfunk der DDR]. The figurine continued to be produced in reunified Germany by Berlin-Brandenburg‘s regional broadcaster, making it a ’Wendegewinner‘ – meaning that it both survived and profited from reunification. The sandman is placed in close proximity to a wire figure of the US-American Mickey Mouse.

Jakob‘s exhibited paintings – mostly portraits and scenic representations – arose in the early 1960s.2 Studies for Jakob‘s Konzerteinführung are arranged in the vitrine of a massive wall cupboard: a painting that he first showed for the ‘Fifth German Art Exhibition‘ in Dresden. The mountain landscape of Zwickau-Oelsnitzer‘s industrial black coal basin, in which Jakob‘s own grandfather worked as a miner, was an additional central theme for his paintings, and it is in this context that Portraitstudie (Kumpel), exhibited in Galerie im Turm, is to be viewed. The central focus of Jakob‘s work are people themselves. Writing on the work of Jakob, chairperson of the Zwickau Kunstverein Siegfried Wagner emphasises his wish to represent people in such a way that they might be accessed on an emotive level, referring to a development that almost certainly was reflected in the artist‘s internal journey.3 For these reasons, Jakob was generally less interested in murals depicting multiple figures, preferring to focus on concentrated depictions with less people. Jakob‘s works were certainly received with some controversy by his contemporaries. Joachim Uhlitzsch, who also ran the Guild of Artists in his day, heavily criticised Jakob‘s Zwickauer Kumpel (1960), commenting that the man depicted appears to have a profession that he does not carry out in the interests of his class, but as if it were a terrifying experience that had ’deformed‘ him.4

A central concern of the exhibition DDR NOIR: Schichtwechsel is to facilitate access to socialist realism that moves beyond the polarity between dissidence and party loyalty, or between figuration and abstraction. What forms, what languages and gestures of exhibiting are possible in order to move beyond judging and disqualifying on the one hand, and romanticisation on the other? Henrike Naumann puts an unconventional manner of dealing with historical work to the test, mapping out an exhibition that does not aspire towards a representative or retrospective status. Instead, the artist‘s own, in part playful aesthetic, together with her references to pop culture, expose the theme to a more nuanced approach, generating moments of speculative contemplation as well as productive conflict. The space-time scala opened out by the exhibition oscillates between the 1960s, the 1980s, the 1990s and the current era.

This anachronism not only brings together two different artistic positions or generations, it additionally touches on a confrontation between diverging understandings of the role of art, which was – and continues to be – validated by the political system of the day. What does it mean for an artist to work towards serving cultural politics? How are such cultural politics compiled, then and now? Where do they differ? What are their similarities? And how do these qualities feed into the writing of art history?